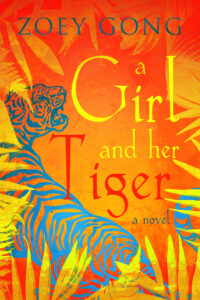 She didn’t plan on becoming a rebel…

After watching her parents serve in British households for her whole life, Priya grew to despise every aspect of British colonialism. After an introduction to a British family in an attempt to secure a servant position of her own ends in disaster, Priya runs away to try and find a better life.

But she doesn’t get far.

Alone on the streets of Bombay, Priya is kidnapped and taken captive aboard a smuggler’s ship bound for the slave markets of the Americas.

And in the cage next to her – is a ferocious mama tiger named Nabhitha!

When Priya and the tiger see a chance for escape, will Priya dare to take it? Or will she end up the tiger’s dinner?

Follow Priya and Nabhitha on a journey of courage and second chances.

A Girl and her Tiger is the third book in the Animal Companion Series, but each book is a stand-alone novel with new characters and adventures.