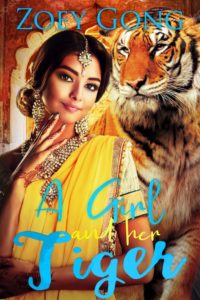 After watching her parents serve in British households for her whole life, Priya has grown to despise every aspect of British colonialism. To avoid being assigned to a servant position of her own, Priya runs away from home the night before her sixteenth birthday.

But she doesn’t get far.

Alone on the streets of Mumbai, Priya is kidnapped and taken captive aboard a smuggler’s ship bound for England.

And in the cage next to her – is a ferocious mama tiger named Nabhitha!

When Priya and the tiger see a chance for escape, will Priya dare to take it? Or will she end up the tiger’s dinner?

Follow Priya and Nabhitha on a journey of courage and second chances.

A Girl and her Tiger is the third book in the Animal Companion Series, but each book is a stand-alone novel with new characters and adventures.