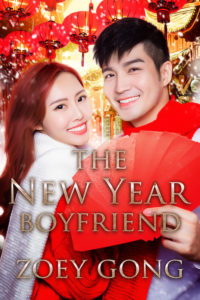 At 27, Winnie is on the verge of becoming an old maid. And she’s just fine with that. In medical school and studying for admission to an exclusive training program, Winnie just needs a few more years to get her life in order before she can even think about getting married.

But her mother has other plans.

Winnie’s mother orders her to return home for Chinese New Year to meet a young man she is sure Winnie will agree to marry if she only meets him. But Winnie won’t let anything—even her overbearing mother—stand in her way of her own goals and dreams. So she does the one thing she is sure will get her mother off her back—she hires a New Year boyfriend.

Kai’s life is a wreck. Working two jobs to help pay for his mother’s cancer treatments, Kai has no time for family, fun, or love. But when he sees a job advertisement for posing as a New Year boyfriend, he can’t pass up the opportunity for some quick and easy cash.

It was supposed to be strictly a business arrangement. But as Winnie and Kai’s worlds come crashing down around them, their fake relationship might be the only real thing they have left.